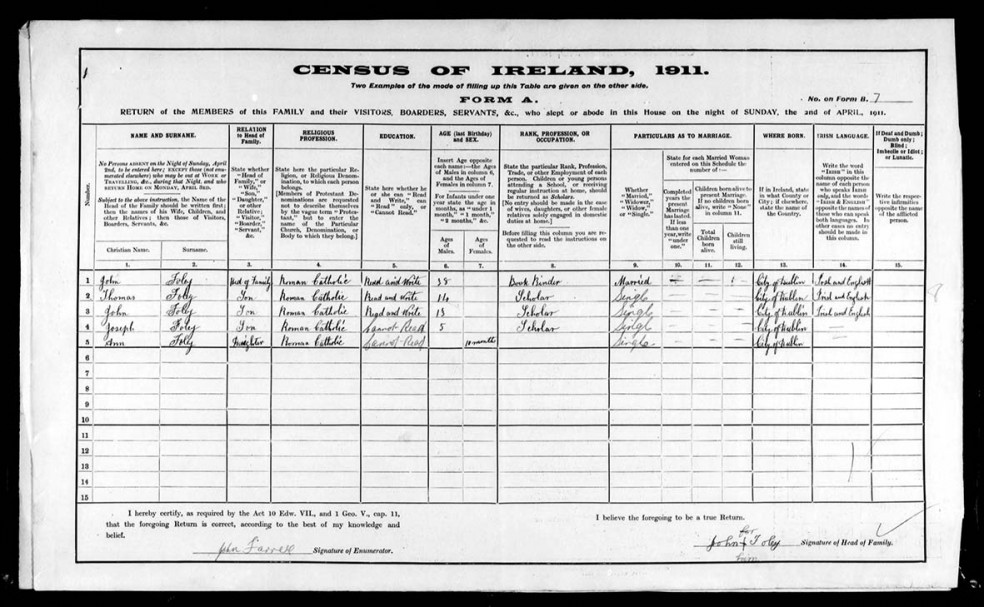 While recently searching for a family on the Irish Census Returns for 1901, I found it very difficult to find them.  They appeared on the 1911 census return and it stated the head of the house was Mary who was married, but no mention of her husband on the return.  So the question was – where was he?  Had he died and she was not recorded as a widow?  Were they living apart?  Was he working elsewhere and boarding in another household on the night of the census?  The 1911 census return also recorded the number of children born and number who survived, so there were some children missing between the two census returns.

I looked for them on the 1901 census returns in Dublin by searching for the children, particularly the younger ones as they would have been easier to find perhaps!  Not so, still nothing.  Part of the street where they were reportedly living prior to 1901 had been demolished, so that was another problem.   I decided to look for the birth record of the last known child born to this couple to see what address was recorded on the civil record.   This child died a year later – 1899, so I looked up the address given on the death record by browsing the house number on the 1901 census return.  To my utter surprise I noted that there were christian names recorded where the surname should have been!  When I opened the household return there they were!!!  It seems that the family’s name had been digitised by their christian names instead of their surnames, I would never have found them as their surname was one of the most common Irish names you could possibly research!!!  This gave me all the information I needed to know! EUREKA!

The lesson to be learned here – THINK OUTSIDE THE BOX – nothing is black and white in genealogy, always expect the unexpected.   Ages, name spellings, number of years married, places of birth can all be incorrect on some census returns, so don’t take the information recorded on them for granted.  Always add/minus 5 years to find the correct date of birth or marriage.   Don’t just look for the family by their surname, search under the christian names too in the event they were recorded/digitised incorrectly.   Apply this methodology to ALL census records in UK and USA, as most people were illiterate so the information given to the enumerator at the time may have been incorrect.