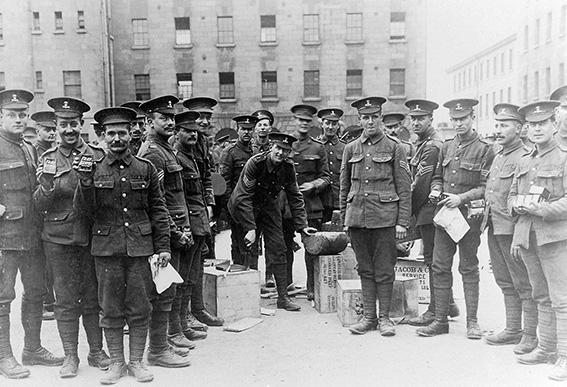 Most of us have an ancestor or two who joined the British Army for WWI, or indeed were involved in the 1916, War of Independence or Civil War here in Ireland.  Sometimes by looking in these records we can be lucky enough to find some great personal information in them such as a physical description, date of birth, next of kin, details of their marriage including wife’s maiden name, and place of marriage, along with names of their children at that time and where they were living.   Unfortunately, only about half of the British Army records have survived for WWI due to the bombings during WWII, and those that have survived can be quite damaged and burnt, hence they are called the Burnt collection.

It will also give details of the theatre of war in which they served and how long, if they were wounded, died or discharged – honourably or dishonourably!  It will also give information on the medals they received.   If they died in action, there may also be a will for them, as most of those who signed up made a will prior to being sent into action.  Those wills available for viewing at National Archives of Ireland, are for those who died during the War and can be viewed online at www.nationalarchives.ie

There are also Soldiers’ Effects records available, whereby you can access details of their effects which were sent back to their next of kin, these can be viewed on some subscription genealogical websites.   If they died in action abroad, then you can also find where they are buried by visiting www.cwg.org which is Commonwealth War Graves commission.

Likewise, if your ancestor was involved in 1916, the War of Independence or the Civil War here in Ireland, you can also check with the Military Archives here in Ireland at www.militaryarchives.ie to see if they gave a witness statement, or applied for a pension, or indeed joined the Irish Army after 1922.

All of these military records are a valuable source during genealogical research and can paint quite a picture of your ancestor – who he was, what he was like and also his character.   For more information on tracing your ancestors check out our website at www.intothepast.co or email us at ams.intothepast@gmail.com.    Anne-Marie Smith MAGI